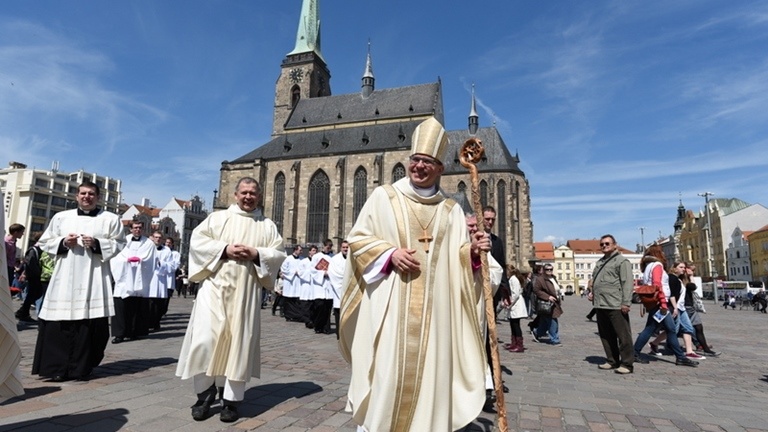 Today (April 30,2016) Msgr. Tomáš Holub was ordained as a bishop by Cardinal Dominik Duka in St. Bartholomew’s Cathedral in Pilsen.

“An important historic event is about to begin.” With these words Bishop František Radkovský opened his homily on the occasion of the very first episcopal ordination to take place in Pilsen. From now on, Msgr. Tomáš Holub is the bishop of the Diocese of Pilsen.

What were the first words of Msgr. Tomáš Holub right after his ordination?

“At this moment I am praying for courage and wisdom so that I can take on responsibility for times when I am to support, lead and decide, times when I am called to defend human freedom and each man’s dignity, to fight the attitude of appeasement and to testify to the Truth which is God.

I am praying for openness and innocence so that I am able to live in your midst as a bishop, to share your joys and worries, to learn together with you where our Lord wants us to go.

I am praying for humility and sensitivity to recognize situations when you, sisters and brothers, are led by the Holy Spirit himself and to be prepared to follow you.

And I am praying that I am able to accept advice from you politicians, members of local governments and citizens in situations where you see things more realistically than I do.

And I ask you to pray for me, to support me and to criticize me if you feel I am wrong,”

The ceremony was presided by Cardinal Dominik Duka, the principal consecrator. Two other consecrating bishops were Msgr. František Radkovský and the Bishop of Regensburg, Msgr. Rudolf Voderholzer. Among those present were a range of respectable public figures from politics, representatives of state administration, army and police to people from cultural life. Due to the limited space inside the cathedral, wide screens had been installed both outside the cathedral and in the nearby Church of the Assumption of the blessed Virgin Mary.

The atmosphere was magnificent, from the opening procession across the crowded square to the informal celebration in Techmania Science Centre.

Although Msgr. Tomáš Holub has already moved to Pilsen, he will be handing over his post of Secretary General of the Czech Bishops’ Conference to his successor, Rev. Stanislav Přibyl. The latter will become an employee of CBC with the full authority of Secretary General from May 1st, 2016, however, he will take up the post officially on October 1st, 2016.

“And he said to them, “Therefore every scribe who has been trained for the kingdom of heaven is like a master of a house, who brings out of his treasure what is new and what is old.” (Matt 13:52)
Obrázek novinky