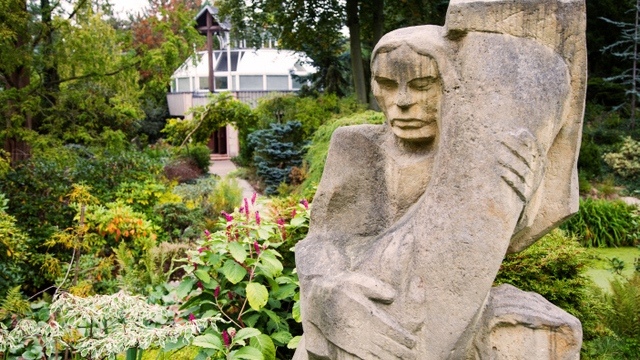 Luboš Hruška was born on July 20, 1927 in Plzeň. He finished secondary school in 1946 and started studying at the Military Academy in the town of Hranice. As a young officer he was stationed near the state border and was arrested during his attempt of crossing the border in 1949.

Luboš Hruška was sentenced to 18 years in maximum security prison, forfeiture of all property and of civil rights. Having been constantly treated inhumanly , he experienced the prisons of Špilberk, Pankrác, Bory, Opava, Leopoldov, Ruzyně, and the labour camp Bytíz near Příbram, where he worked in the uranium mines.

During the years in prison Luboš Hruška met many imprisoned Christians, priests and bishops and, thanks to their witness, he adopted the Catholic faith. He was secretly christened by P. František Šilhan, the provincial of Jesuits, who had also secretly prepared him for christening. For Luboš Hruška, the initial event on his path of faith was meeting P. Ondřej ( his civilian name was K. Frgal) shortly after his conviction. This Capuchin monk received him in their common prison cell; Luboš Hruška was talking about this essential meeting until his death as the first touch of Jesus Christ - loving and liberating.

During his more than ten year imprisonment, Luboš Hruška made a promise: if he survives, he will turn the orchard, inherited from his parents, into a park. The park, consecrated to the Holy Cross, will serve for healing the human soul. This promise was completely fulfilled.

Without having deep faith and confidence in God's plan, Luboš Hruška wouldn't be able to finish the work. On his path of faith he was accompanied by P. Michal Pometlo, Franciscan, and strongly supported by his family, especially by his wife, Lída. She accompanied and helped him in both good and bad times during the whole marriage.

Last two years of life Luboš Hruška  spent confined to bed, in care of his wife. Due to her serious illness she departed this life in November 2006. Luboš Hruška followed her seven months later, on July 30, 2007, a few weeks before his eightieth birthday.

Shortly after return from prison (in 1960), Luboš Hruška started to work in the orchard and gradually change it into park of meditation. He cut the fruit trees, landscaped the ground and, along with his job as a worker, he often went to Průhonice to hear the lectures about garden architecture.

However, Luboš Hruška was above all concerned about realization of the spiritual idea of the park which would forever commemorate the suffering of people who have opposed totalitarian regimes (whether fascist or communist). This spiritual idea is expressed by the suffering of Jesus Christ, who accepted it as a sacrifice of mankind.

Stations of the Cross

After the revolution in November 1989, the whole place was finished by building a chapel, designed by architects Soukup and Opl. It was built by Luboš Hruška and his foundation and is consecrated to St Maximilian Kolbe. This Pole priest, later canonized, sacrificed his life for an already condemned prisoner, father of three children, and was executed in the Nazi concentration camp of Auschwitz.

Memorial to the Victims of Evil

In 1995 Luboš Hruška donated the whole area of Meditation Garden to the bishopric in Plzeň. The garden and chapel, officially called Memorial to the Victims of Evil, serves everybody for both religious and cultural purposes.

Luboš Hruška received many awards for his life work. He is for example the holder of the Historical Seal of the Town of Plzeň (1994), the Order of T. G. Masaryk, awarded by the President of the Czech Republic in 1997, the Pontifical Order of Pope St Sylvester, awarded by Pope John Paul II in 2002, the Medal of the Military Association of the Rehabilitated (2003), the Region Commissioner of the Plzeň Region Prize for  Civic Bravery (2003), the Honorary Citizenship of the Town of Plzeň (2006). In 1999, an asteroid (18841) discovered by astronomers Jana and Miloš Tichý from the Kleť observatory, was named Hruška. On the day of his funeral, July 9, 2007, he was awarded the Golden Cross of Merit by the Secretary of Defence, in memoriam.

The message of his life, represented by the Meditation Garden in Plzeň, might be expressed in following words:

“And he said to them, “Therefore every scribe who has been trained for the kingdom of heaven is like a master of a house, who brings out of his treasure what is new and what is old.” (Matt 13:52)
Obrázek novinky

Today (April 30,2016) Msgr. Tomáš Holub was ordained as a bishop by Cardinal Dominik Duka in St. Bartholomew’s Cathedral in Pilsen.